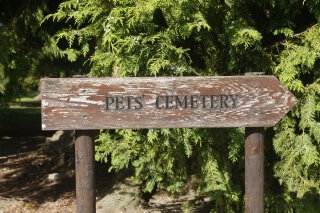 Lacking an official place to bury their beloved pets, the citizens of Belgrade, Serbia, have turned to clandestine methods.  They have created hidden pet cemeteries in the city's parks.

Many people today treat their pets like they were members of their families.  They often leave their pets inheritances and, in some cases, create elaborate trusts for the care of their pets.

Many people also want to bury their pets more formally in a traditional burial site, but not all cities around the world have places to bury pets.

As Fox News reports, this is the case in Belgrade, Serbia. The article is titled "Improvised Pet Graveyards Hidden in Belgrade Parks."

Belgrade has been promising citizens a pet cemetery for a decade yet the project to actually build one is still in the planning phase.

Not wanting to wait for the city to create a place for their pets, many residents have taken to burying their pets in the city's parks in hidden graveyards.

The city does offer other ways to dispose of animal remains through official channels.  That is sometimes not acceptable for people who want a place they can go to visit their beloved former pets.

This demonstrates that the pet-human bond is stronger than ever.

If you feel strongly about what happens to your pets after you pass away, then visit an estate planning attorney to see what can be done to make sure that your pet is taken care of.